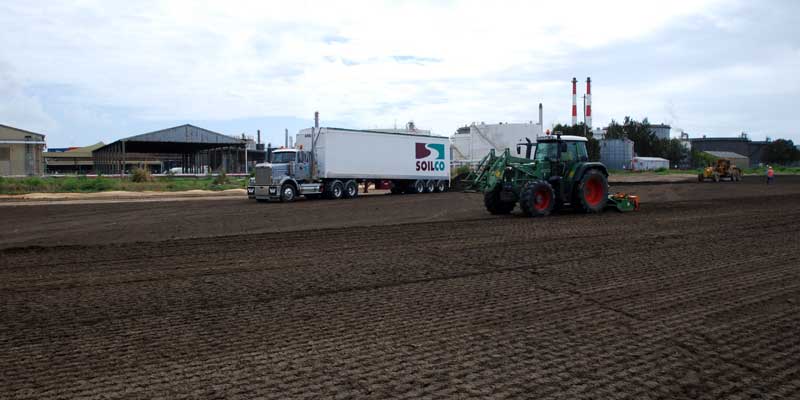 Enviropacific Services is an Australian leader in Civil Construction, Environmental Remediation, Asbestos and Hazardous Waste Management. Soilco has been working with Enviropacific Services on a soil rehabilitation project at Botany. This project is intended to restore land that has been subjected to a century of industrial use.

According to the remediation action plan for the site, asbestos soil in the landscaped areas required a physical separation layer of 300mm of virgin excavated natural material to be spread over the existing soil. In addition, fresh topsoil had to meet a performance specification. Botany Sand was recommended as the key component for the growing mix, as this matches the native soil of the area.

Constraints for the project included:

The earthworks have created a basin that will capture excess water from flash flooding, allowing the area to drain naturally. This means that the growing mix has to be porous to allow water movement through the topography.

Soilco sourced a growing mix that meets hydraulic conductivity (drainage) specifications. Additional environmental testing ensures there is balanced chemistry and give assurances that no contaminants are present.

After installing the growing mix, an additional organic layer was required to support vegetation for the establishment phase. Soilco supplied a custom blended GO Compost to maintain soil moisture and provide necessary nutrients for the specified plant species. The GO Compost was spread and cultivated to achieve an open layer with reduced bulk density and consistent depth.

Part of the area was seeded by direct drilling with a parkland blend: 56% turf type fescue, 30% Perennial Rye, 5% Couch, 9% Creeping Red Fescue. The remainder was jute matted and planted out with a variety of native plant species. The landscaper has reported that in the first week there was 75% germination and expects to have a successful germination rate by the end of the second week.